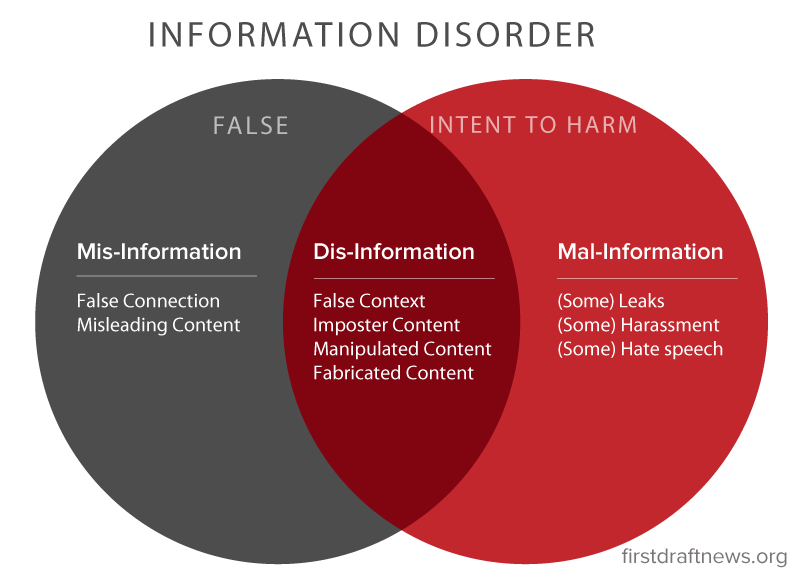 In the thorny issue of Fake News, production of false news, there is a distinction that is proposed and that clearly distinguishes the will to produce the false from the involuntary nature of the act that is the result of errors or failures and leads directly to disinformation. Here the term Misinformation is introduced.

Scholars and analysts go beyond the definition of Fake News, considered by some not suitable to represent the complexity of today’s communication and new lexical definitions are introduced.

Claire Wardle, director of First Draft News, an international network on online source verification, and Hossein Derakhshan in a report Information Disorder: Toward an interdisciplinary framework for research and policy making, introduces the definition of information disorder, to analyze precisely the appearance of communication pollution. The report was commissioned by the Council of Europe, which wished to dedicate an in-depth study to the topic “Information Disorders

In the report there are some programmatic indications that can help the system to reduce the phenomenon of information pollution.

It is important to improve the quality of titles and subtitles, which are the first thing that a user on social media reads and introduced the debunking of sources and facts.

Cover image: The graph representing the difference between Mis-information, Dis-Information and Mal-information is published by https://firstdraftnews.com/