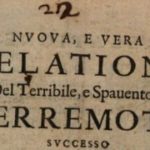 l 7 October 1639, an earthquake of magnitude 6.2 destroyed Amatrice and Accumoli.

The dramatic event, there remains the vivid description contained in the “Nuoua, and real relatione of the terrible, and spauentoso earthquake happened in the city of the Matrix, and their status, with even Accumulation suffering, and circonuicini places under 7. them this month October 1639. with the death compassioneuole of many people, the loss of cattle of every kind, and all the damage on up to current day”, Carlo Romano Tiberij.

“Some escape – reported the eyewitness – others rifuggiano in the Church of St. Dominic in the army of the S.S. Rosary to invoke the protection of the Blessed Virgin “.

The Lords Alessandro Orsini and his wife, principles of amateur, were forced to leave their building and escaping in their country villa of Santa Iusta. The rapporteur estimates the damage at 400,000 crowns era. Many of the dead were buried under the ruins, however, the rapporteur will officially cites 35 ..

The shock more ‘strong hard’ fifteen minutes. Damage to the various fractions are listed in the following way: “Field Tosto ruined in part, S.Martino all, Collalto overgrown, Pinaca part, Filetta and Svevocaia all, The abbey of St. Lawrence under the Bishop of Ascoli almost all (save all the brothers emphasizes the rapporteur), Padarga in part, State house just a house standing, Corva destroyed, Fork whole, good Capriccio part, little Leila. “

Other major earthquakes in the area were registered in 1646 and in 1703, to coincide with the first big earthquake Aquila.