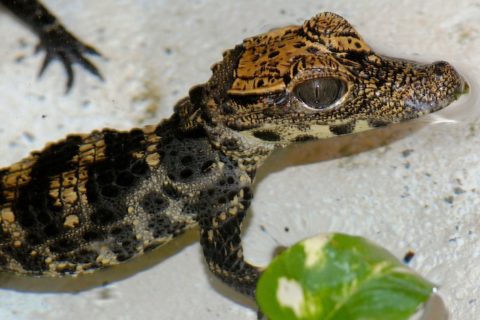 And it is called Congo ‘s first original African dwarf crocodile (Osteolaemus tetraspis) was born in an Italian zoo.

It ‘came to light on September 14 at the Safari Ravenna and belongs to a species considered vulnerable by the IUCN (International Union for Conservation of Nature), as well as being included in Appendix 1 of CITES, the Convention on International Trade in Endangered Species, a maximum level of protection.
Of these specimens are present only ten within the Italian zoos and, according to the IUCN, the wild population can ‘be estimated at between 25,000 and 100,000 copies.

The draft of the Safari Ravenna reproduction, and ‘Party in 2014, when the expert team of the center has Avvito a project of the African dwarf crocodile breeding. Unfortunately the 11 eggs deposited June 5 were all infertile.In the spring of 2016 “Mom” Guinea and “papa ‘” Togo, two copies Both 21 year old, is the eggs in the nest built by the mother are again paired and 9 June were found.
Of 16 eggs laid, unfortunately, 12 were broken because of sudden movements of the female and 4 remained, after the first 30 days of incubation at 30 with 80% of humidity ‘,
and ‘fertile result only one.
At the dawn of 95 days and ‘hatched the egg and within 24 hours the little Congo and’ hatched.“To be able to achieve this remarkable record, and ‘was necessary to create within their exibit their natural environmental conditions. – Says Peter Ciaccia, keeper and manager of the reptile house of Safari Ravenna – The female and the male crocodile were continuously monitored and followed so that ‘the pair could take place in the best conditions. The egg and ‘was incubated inside a special artificial incubator, where the correct humidity conditions’ and temperature “were reproduced.