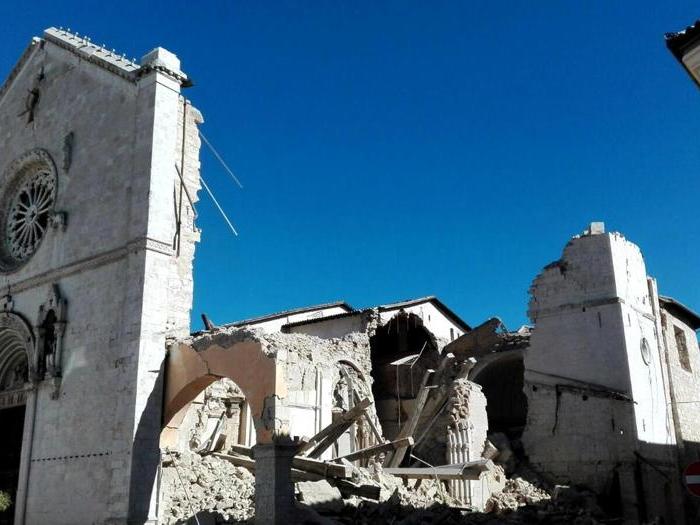 The epicenter of the massive earthquake, a magnitude of 6.5 at a depth of 10 km, which again hit the center against Italy was recorded in Norcia, Preci, Castelsantangelo sul Nera and Visso. A zone between Marche and Umbria, already hard hit by the events of August 24 and 26 October.

Despite the violence, there are no deaths, and the injured are twenty, none of them in serious condition, but the destruction reigns everywhere and is still undetermined number of displaced persons, which in any case would be thousands. It ‘was the most intense shock of recent decades, and the seismic swarm shook the ground all day making the most complex relief.

The situation is particularly delicate in Norcia where the basilica of St. Benedict has collapsed: the monks took to the streets to pray and Poor Clare nuns of Santa Maria della Pace had to leave the convent as Sister Lucia said.

“Our church and our monastery are intact, but the cracks, I went to see, there is no danger, but we must also stand out because we are in front of St. Benedict
It collapsed and in St. Augustine. “

60% of Castelluccio collapsed. There are landslides, crumbling bridges, blocked roads and closed. many
buildings are uninhabitable, with ledges and rubble that each new tremor come off. The people took to the street in the early morning and maybe the winter time changeover has meant that many People were already awake and ready to run away.
“I was at my sister’s house because he had not been damaged, II got up to make coffee and watch as I went out. “

It was the strongest quake in Italy since 1980, more stronger than that in L’Aquila, and now look to the future is difficult even if the inhabitants of Norcia and of these troubled areas dell’appennino love their land and want to leave.

For farms plateau above Norcia and the border between Marche and Umbria, the situation after the earthquake in the last two days, “and ‘very critical.

Landslides have isolated many dairy farms and dairies – reports the Regional Directorate of the CIA Umbria – and no water, either to quench the same farmers and cheese makers for both the stables. And without water they do not take the animals. “

At an altitude of a thousand meters, reports the Confederation of Umbrian farmers, breeders have spent a sleepless night, not to scare away the dall’aziende cattle that have no fences as a privileged breeding in the wild. Structural damages are recorded in the stables at Castel Sant’Angelo that have suffered collapses.

I, however, rescuers were able to bring food for everyone. The emergence and ‘so’ high to push the Fernanda Cecchini Regional Councillor to convene, in Norcia (Perugia), an urgent meeting with all agricultural organizations, going this afternoon to determine the first actions of support to farms.

“We need to give on-site admission to farmers – said Cia Umbria – primarily with wooden houses and stables or mobile, from campers caravans, with costs that can be anticipated by the operators if there is’ a commitment to refund with the times some”.

In the situation of devastation, the Umbria Cia also noted two positive notes: Castelluccio are not destroyed the stables because ‘already’ built of wood and with anti-seismic techniques.

Umbrian oil mills also continue their activities’ for the production of the famous extra virgin olive oil because ‘located in zones unaffected by activity’ seismic.