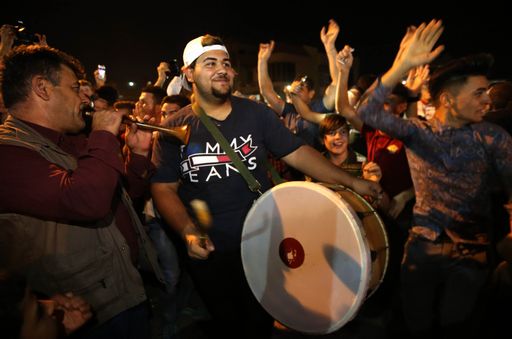 Hundreds of Iraqi Christians, displaced from Qaraqosh, south of Mosul, celebrated with songs and dances the military offensive under way against the jihadists of the Islamic State (Is). Men, women and children, some with candles in hand, gathered to pray in the church of Mar Shimon (San Simon) to Erbil, capital of the autonomous region of Iraqi Kurdistan.

The armed forces have also been put in Qaraqosh, 15 kilometers south-east of Mosul, in the hands of ISIS since August of 2014. “Today is a happy day. There’s no question that our land will be freed and we Thank God, Jesus Christ and the Virgin Mary, “said Hazem Djedjou Cardomi, a journalist present among the faithful. It was about 50,000 inhabitants before the arrival of Qaraqosh jihadists, most of them Christians, so as to make the greatest Christian city in the country. “We suffered a lot and now we can not wait to get back in our region as soon as possible,” he added Cardomi.

“They want to return to their homes, their land, even if their homes have been destroyed, and live in peace in their city,” he told France’s father presses Djahola George.