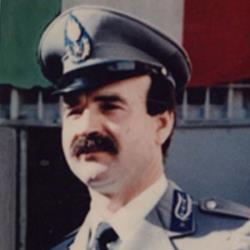 Twenty-six years ago, on October 13, 1992, in Porto Empeclode he was killed by the Mafia Pasquale Di Lorenzo, an officer of the Penitentiary Police, on the orders of the boss Totò Riina.

Born in 1947 in Sipicciano di Galluccio, in the province of Caserta, he was Superintendent of the Penitentiary Police at the prison of San Vito, the old monastery that at the time served as a prison in Agrigento

He acted as regent Commander of the prison and was considered by all as “a person with strong character, not inclined to compromise and considered by the prisoners a hard” and aware of the delicate role that played in a prison with a strong presence of prisoners for crimes of mafia. He lived in Porto Empedocle with his wife and two teenage daughters.

On October 13, Pasquale Di Lorenzo was in the countryside, in the Durruelli district of Porto Empedocle, where he owned a plot of land that he used for the training of defense dogs, a passion that Di Lorenzo devoted himself to during his free time. In the country he went at 10 and stayed there for the whole day. His lifeless body was found the next morning, he had been shot dead with four gunshots and had been left in a pool of blood and mud after a rainy night.

The police began the investigation, but immediately began the misdirections and the case was filed by attributing the murder to a dispute related to personal matters.

Seven years later, in 1999, the justice collaborator Alfonso Falzone accused himself of the crime and, before the judges of the First Section of the Court of Assizes of Agrigento, unveiled the motive, made the names of the principals and the name of the accomplice who, together with he was the material executor of the crime

At the trial the statements of the collaborator Falzone will converge with those made by Giovanni Brusca, who will confirm the following thesis: the murder of Di Lorenzo has matured in the context of a terrorist strategy carried out by the members of Cosa Nostra against operators of the Penitentiary Police , following the entry into force of art. 41-bis of the Penitentiary Order.

On October 13, 1992, the killers executed the orders of Riina lurking in front of the doghouse of Di Lorenzo. Around 11.00 pm Di Lorenzo left the town, closed the gate and headed for the car; at this point two shots started from the long-barreled shotgun exploded by Alfonso Falzone placed near the kennel. Pasquale Di Lorenzo falls to the ground; at that point Gerlando Messina, Falzone’s accomplice, ends the man with four gunshots.

The murder of Pasquale Di Lorenzo is consummated in October 1992, a few months after the attacks on the Falcone and Borsellino judges, and the mafia tries to react to the restrictive measures called “Prison hard”, which the bosses were subjected to in principle institutions safety of Pianosa and Asinara.

Totò Riina decided to respond to these measures by ordering the killing of a penitentiary policeman for every prison in Sicily. The first to die was to be just Pasquale Di Lorenzo, known for his professionalism and morality. In the meantime, the order to suspend the ambush had come from Palermo, as further restrictive measures were feared, but Pasquale Di Lorenzo was too late. The Superintendent was killed on the evening of 25 years ago.

But for seven years, in addition to the pain for the death of Pasquale, Di Lorenzo‘s family had to suffer the accusations of being involved in the killing of the Penitentiary Police. Only in 1999, after the confession of a repentant, was the truth re-established.

The memory of Don Marcello Cozzi, Vice President of Libera

Totò Riina decided to have a prison officer killed by province, starting from Agrigento, where Pasquale Di Lorenzo was placed in the crosshairs, “secondino” integerrimo, originally from the province of Caserta but married in Potenza. Two assassins waited for him in front of his country house, in Porto Empedocle, on the evening of October 13, 1992, and shot him point-blank.

In this year so full of celebrations and anniversaries of major massacres of the mafia, the memory of us all goes also to Pasquale, to his silent sacrifice, to his name passed into the background, to remind ourselves that there are so many of us who they have put their lives in this dirty war against the mafias, and to tell their family members that men are the pride of our country.