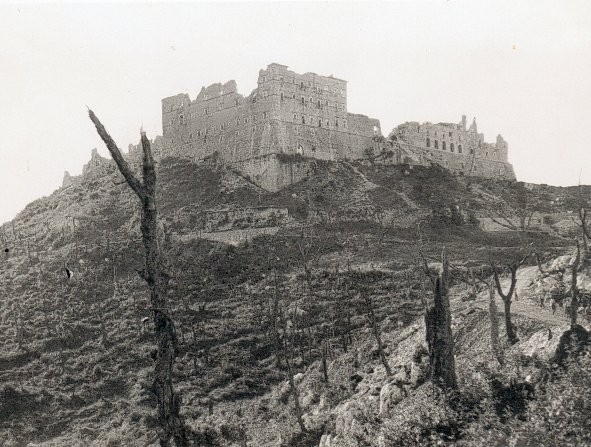 On 15 February 1944, the Benedictine monastery of Monte Cassino was bombed by the allies, and completely destroyed. Between 9, 28, 13,33 and 15 February, 239 bombers, medium and heavy, dropped 453 tons of bombs and a half. Eight planes waves that pulverized the ancient Abbey of Montecassino

The monks present in the Abbey on the morning of February 15 wrote in the diary.

About 8:30 am, we recite First, Third and Mass Conventual de Octava in the room used as a chapel. After we go to the room of Fr Abbot is, Sixth and Ninth. While we pray kneeling end atifona the madonna: Et pro nobis Christum exora, terrified sudden we hear a tremendous explosion. For they follow no other number, it is about 9:45. We gather on his knees in a corner of the room, around P. Abate which is standing upright: he gives us absolution: we say short prayers for the plunge. Explosions shake us strongly: we put cotton wool in his ears. The thick walls of the shelter with any environment, heave so scary. From the narrow windows enters dust and smoke, and you can see the flames of those bombs falling on the side of the College. I do not know how long this hell, sure seems very long.

11.15i monks to record in his diary a break in the bombing that deceives the monastic community on the conclusion of the bombing

Suddenly at around 13:00 we hear us tremendous explosions and tremors idescrivibili Factory

Martha Gellhorn, sent to the Italian front, he wrote

“I remember the exact moment of the bombing of Monte Cassino, I watched him, sitting on a stone wall or spelletta of a bridge, and saw the planes arrive and release, then the monastery tarsformarsi in a cloud of dust, and I heard great explosions, and I, like all the other fools, remained impressed enough to applaud. “

Many had approved the bombing spectacular but useless and harmful for the same allies since then the Germans used it the monastery ruins to organize an even tougher resistance. The allies tried to justify their unnecessary and harmful bombing justifying the decision with the need to stop the Germans who were inside the abbey, but this was refuted gisutificazione just after the bombing by the monks and all subsequent documents that showed the absence of the Germans. There was even some allies attempt to provide some proof to the Vatican about the presence of the Germans inside the Abbey, but when military leaders realized that the evidence did not stand up to reality was coined the expression “Overwhelming evidence” used by President Roosevelt in a direct communication to the pontiff.

The responsability of the useless bombing

The decision to bomb the monastery was wrong, and recognized by the General Clark, but you still can not understand why he was discharged on the monastery such a quantity of bombs, 453 tons and a half, on a goal so small and why was decided to schedule 8 of planes waves over a period of 4 hours. To destroy the monastery founded by St. Benedict were enough few aircraft and it was not necessary to use the strategic air force, flying fortresses, that was usually used for strategic objectives such as ports, airports.

The responsibility of the useless bombing was attributed solely to the general New Zealand Freyberg, but remains strongly doubt, in the absence of certain documents, which considering the historical and religious importance of this monastery in the world, US President Roosevelt and British Prime Minister Churchill not they were informed and did not give their approval.