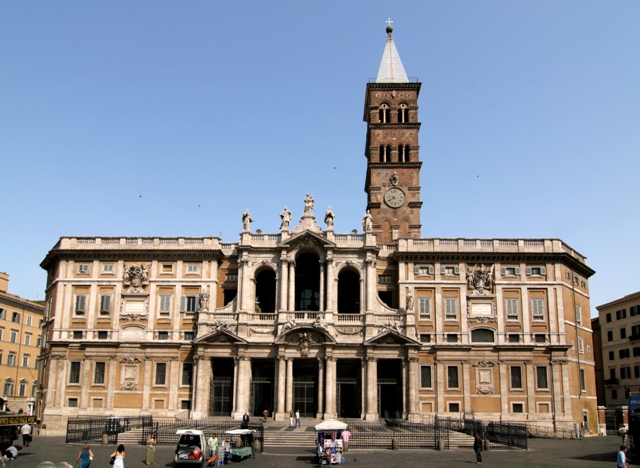 The Basilica of Santa Maria Maggiore, situated on the Esquiline Hill is one of the four patriarchal basilicas of Rome and is the only one to have retained its paleo-Christian structures. The tradition tells that it was the Virgin Mary herself inspired the construction of the Esquiline Hill, appearing in a dream to both the Patrician John and Pope Liberius, asked to build a church in her honor, in a place that she would miraculously indicate . On the morning of 5 August, the Esquiline Hill was covered with snow. The pope traced the perimeter of the new church and John provident in its funding. Of this church we just have nothing if not a step of the Liber Pontificalis, which states that Pope Liberius “Fecit basilicam appoint its juxta Macellum Liviae”.

The splendor of the marbles and the richness of the decorations

present Basilica dates back to the fifth century d.C .. Its construction is related to the Council of Ephesus in 431 A.D. that proclaimed Mary Theotokos, Mother of God, and it was commissioned and financed by Sixtus III as Bishop of Rome. Entering it, one is overwhelmed at seeing its vastness, the splendor of its marbles and the richness of the decoration; The monumental effect is mainly due to the shape of the structure of the basilica and the harmony that reigns among the principal elements of its architecture. Built according to the canons of the “elegant” pace of Vitruvius, the basilica is divided into three naves by two rows of precious columns on which runs the skillfully wrought entablature, interrupted at the apse of two arches erected for the construction of the Sistine Chapel and Pauline . Between the columns and the ceiling, the walls were punctuated by large windows of which still remain, having been walled up the other half.

The Santa Maria Maggiore uniqueness, however, is due to the splendid mosaics of the fifth century, by Sixtus III, that run along the nave and on the triumphal arch. The nave mosaics recount four cycles of Sacred History featuring Abraham, Jacob, Moses and Joshua, and together, they want to bear witness to God’s promise to the Jewish people of a land and its help to reach it. The story, which does not follow a chronological order, starting on the left wall near the triumphal arch with the Sacrifice of Melchizedek, king-priest. This panel shows clear Roman iconographic influence. Melchizedek, represented in the customary gesture of offering, and Abraham, wearing a Roman toga, is reminiscent of the equestrian statue of Marcus Aurelius. Subsequent panels depicting scenes from the life of Abraham prior to the first pane. This has long believed that each panel was an end in itself until, deepening the study of the mosaics, it is understood that the decoration was planned and organized. The Melchisedek panel ties the nave images together with those of the triumphal arch where the childhood of Christ king and priest is told.

Entering the porch, right, stands a statue of Philip IV of Spain, benefactor of the Basilica. The sketch of the work, made by Girolamo Lucenti in the thirteenth century, is by Gian Lorenzo Bernini.

At the center of the great bronze door created by Ludovico Pogliaghi in 1949, with episodes from the life of Mary, the prophets, the evangelists and the four women of the Old Testament prefigure the Blessed Virgin. To the left of the Holy Door, blessed by John Paul II on December 8, 2001, brought to completion by the sculptor Luigi Mattei and donated to the basilica by the Equestrian Order of the Holy Sepulchre of Jerusalem.

At the center of the risen Christ, the model is the man of the shroud, which appears to Mary, represented as the Salus Populi Romani. Top left the Annunciation at the Well, a story drawn from apocryphal Gospels, right Pentecost.

Down the left side, the Council of Ephesus which Mary as Theotokos, to the right the Second Vatican Council which wanted Mater Ecclesiae.

The coat of arms of John Paul II and his motto is represented at the top, while the bottom two of Cardinal Carlo Furno, who was archpriest of the Basilica, and the Order of the Holy Sepulchre.
Entering the basilica is still admired by the uniqueness of the mosaic floor of marble workers Cosma masters called “cosmateschi” (sec. XIII).