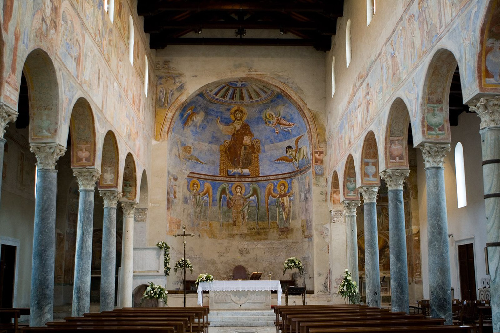 The Touring Club of Italy draws the attention of the institutions and citizens on the situation of the Benedictine Abbey of Sant’Angelo in Formis in Capua, Campania, abandoned in conditions of environmental instability and inaccessible to the faithful and to the families residing in the area.

The Abbey, begun in the Lombard period and rebuilt in the twelfth century, is an admirable work desired by Abbot Desiderio, the only one still present after the destruction of the contemporary Abbey of Montecassino built by the same abbot. Oriental taste in its architecture, it houses a unique series of frescoes, made by local masters, who also described to those who could not read the fundamental moments of the Old and New Testament. Beautiful also columns and capitals, all different and the result of reuse of the materials of the Roman temple that stood in the area.

After a long period of closure for the restoration of the church’s supporting structures and precious frescoes, the monument was reopened, but shortly thereafter there were ruinous collapses of some parts of the walls that surround the entire archaeological area, including the ancient temple of Diana Tifatina.

For a long time close to the ancient walls, in fact, houses and tenements of fortune and abusive were built, then abandoned. Due to the abandonment, the growth of spontaneous vegetation and the penetration of rainwater, collapses and collapses have occurred. The precious Arch of Diana has also been closed to the public and the simple pedestrian crossing in the area is forbidden.

Moreover, a large hole was found in the lower part of the ancient wall where this surrounds the apse area of the Basilica, whereby water easily penetrates the foundations, which are then the same as the temple of Diana. The facts add up to the danger caused by the buildings on the hilly area behind the Basilica, occupied by illegal buildings and in strong ruins.

For all these reasons the Touring Club of Italy appeals for all the authorities, national and local, and especially the Ministry of Cultural Heritage, to intervene promptly and effectively to restore a place that is an asset of historical, artistic, monumental and religious value. immense.

The goal is not only to reopen the area to the public, but also to secure the archaeological remains and bring the complex back to its former glory with a complete reconstruction of the entire hilly area.