After passing the Volturno river in September 1943, the Allies had to travel about seventy kilometers before arriving on the front of Cassino.

It was an extremely hard and tiring journey to the front of the Gustav line, as weather conditions worsened considerably: rains, snow and sub-zero temperatures made the conditions impossible.

The famous American war correspondent Ernie Pyle wrote that “the country was a shocking beauty and an equally disturbing difficulty to snatch from the enemy”.

To advance for 80 km from Naples to Cassino the Allies took about four months, half needed to cross the Winter line and advance for another 10 km. The Germans to represent the great difficulties encountered by the allied forces, with sarcastic tones, published an image of a snail that slowly climbed the peninsula with a caption that said “the road is long”

After crossing the Volturno they found themselves facing a hostile environment in addition to the harsh weather conditions. At the beginning of November, the Americans managed to overcome the Barbara line passing through Presenzano and conquered Monte Cesima, climbing steep rocks.

But it was the only peak conquered until then because in the other two sectors the progress was extremely slow. When General Truscott climbed to the top of Monte Cesima and observed the surrounding area, he understood that the only road to Rome was the state road number 6, Casilina.

But the extremely difficult and full of obstacles test the Allies had to face it on the left side of the deployment where the 56th British Division attacked Monte Camino in order to circumvent the Mignano pass. But the soldiers found themselves facing the well-fortified line Reinhard or Bernhardt which they called the Winter line, where the soldiers found themselves under a barrage of mines, machine-guns and mortars. 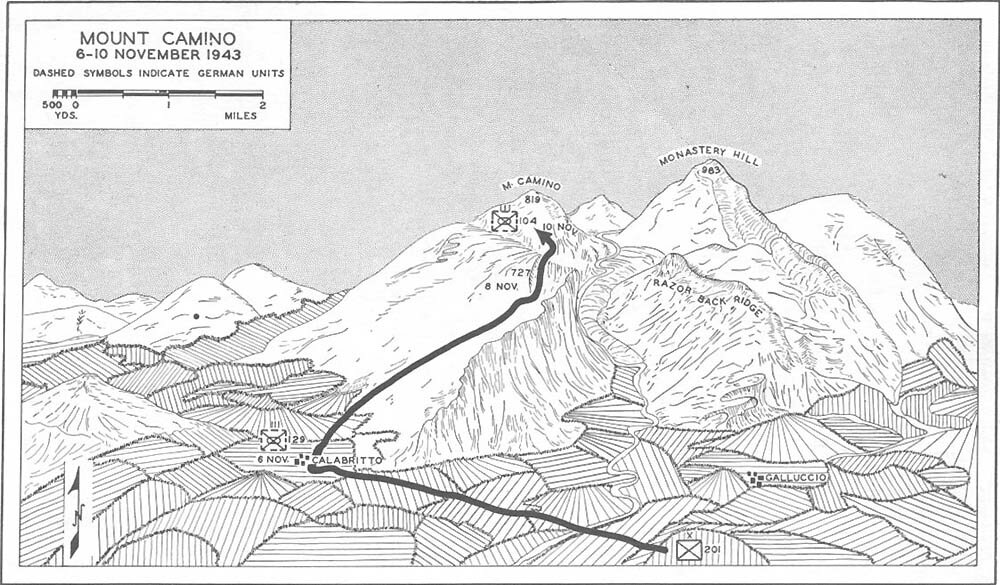 The map indicates the German defensive barrier at the center of the Reinhard Line, with Monte Camino and Monte La Difensa blocking the advance of the Allied forces in the mountain sector at the beginning of November 1943. (United States Army, Center of military history)

General Clark tried to support the Englishmen on the left flank, ordering General Truscott, commander of the 3th Division, to attack another peak, Monte La Difensa, a geological appendix of Monte Camino. But even this assault failed, the Allies managed to conquer only one outpost near Monte Lungo and Monte Rotondo.

It was a black November for the allies, from the beginning of the crossing of the Volturno they had managed to advance very slowly and only on the right side of the deployment they had a decent position with the conquest of Monte Cesima, while in the center they remained still in Mignano and on left flank had suffered a searing defeat with huge losses on Monte Camino.

Now General Clark was convinced that to overcome the impasse and break through the winter line to get into the Valle del Liri, the strategic point to attack was San Pietro. To achieve the goal he had to aim at Monte Sammucro, 1300 meters above the town of San Pietro.

The new plan to break through the winter line was based on three attacks: on the right side San Pietro, in the middle attack on the Mignano pass and on the left the attack on Monte Camino and La Difensa, two peaks that formed a single mass for 10 km. At the end of November, the penetration on the Winter line had been arrested in front of the main line, despite the conquest of some hills near the pass of Mignano. The dominant heights of Monte Camino and La Difensa remained under the control of the Germans. Senger reinforced the front with two new divisions that served to shore up the defense and raise the morale of the troops. 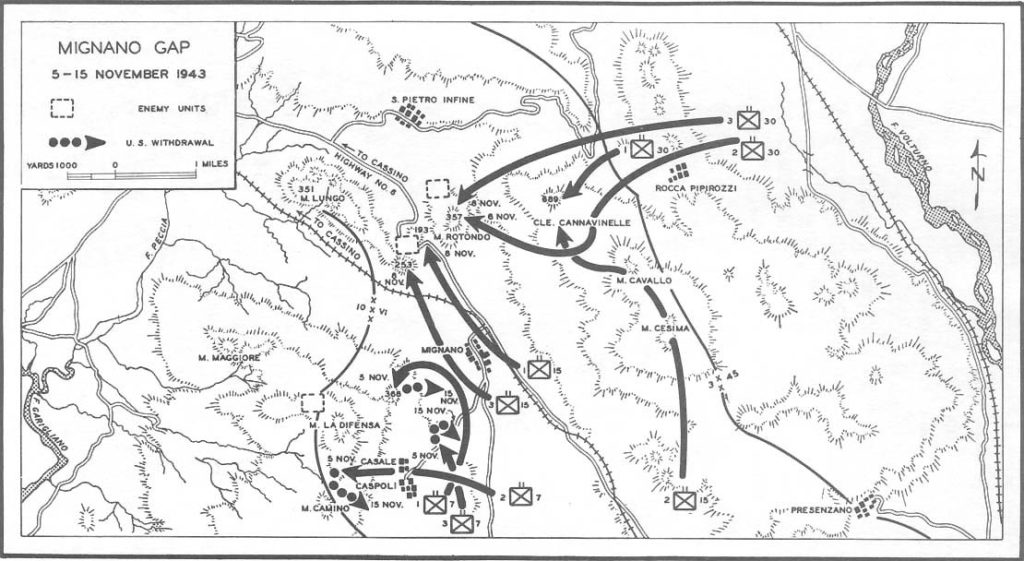 The attack of the allied forces in the area of Mignano Monte Lungo along three routes. During the assault the Germans managed to repel the Allies on Mount Camino and Mount La Difensa (United States Army, Center of military history)

On 5 November the British under General McCreery attacked Monte Camino. Soldiers encountered mines and explosive traps. Senger claimed that they had alerted the troops in the area of ​​Monte Cesima, where the Germans thought it was the weak point, at which point there could be the danger of a breakthrough “so we decided our whole attention at this point. he would have tried to overcome this narrow space, “wrote the general in his memoirs.

The Germans concentrated all their attention at that point, convinced that the Allies would try to overcome the grip of Mignano, using armored formations. Senger argued that neither he nor the other German commanders would have employed an attack in the mountain sectors because of the enormous difficulties they would have encountered in the attack on the mountain sectors, even though this possibility was not overlooked during the various assessments.

Clark reports that he met McCreery on November 12 because he believed that the British could take Monte Camino, which was the most formidable of these peaks, although I will have some more rugged nearby ones. McCreery told Clark that the 56th Division was no longer able to fight and needed a long rest period. 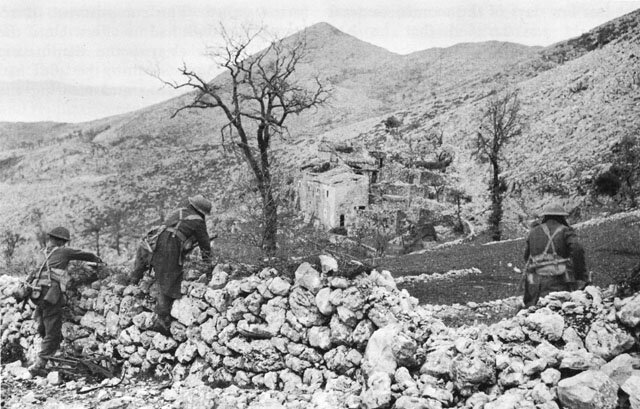 The assault of British troops at Monte Camino. (November 1943)

The German command at the beginning of December tried to understand if the attack was concentrated at the Mignano pass or the Allies would attack the dominant heights of Monte Camino and Monte La Difensa.

General Senger visited the front on December 2 and upon his return realized that the Allies were preparing to attack on the mountain front. “The northern slopes of the Monte Camino massif on the other side were stuck in a barrage of fire like I had never seen since the First World War,” wrote General Senger in his memoirs.

In fact, Senger had well grasped the strategy that the Allies had in mind as they were concentrating all their efforts into a very strong artillery attack, over nine hundred cannons began to thunder. “The blaze blushed the clouds over the Camino and La Difensa.” The explosions bloomed like flowers on the slopes and the whole mountain seemed to go in. Over the next two days, 200,000 grenades were thrown: eleven tons of steel per minute fell on some targets “, Rick Atkinson writes in his book The Day of the Battle, (Mondadori)

Unity was the first experiment of a special unit of the US army. The unit was created by Frederick on the instructions of General Eisenhower and was made up of Americans and Canadians, the force trained in Helena in the mountains. 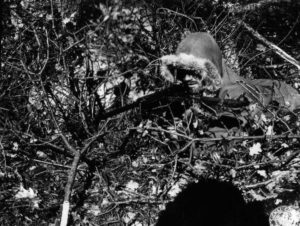 The First Special Service Force began the activity on July 20, 1942, trained with parachute launches. Frederick organized a force of 2900 men and attacked the massif of Monte La Difensa by assaulting the German lines with a silent zig-zag across the slopes of Monte La Difensa.

While the British troops climbed Monte Camino, the American special unit faced the impossible climb of the Monte La Difensa wall. On the evening of December 3, the unit had conquered the peak of Monte La Difensa but the advance to the west to reach the English people were fighting on Monte Camino on the left side was blocked by the German attack.

Despite heavy rains and hail, the German counterattack forced the black devils to burrow on the top of Monte La Difensa. After three days of hard fighting in the worst weather conditions they managed to advance west and occupy a strategic point under Monte Camino “I stopped burying dead”, Frederick wrote “German snipers show us hell and it is extremely difficult to catch them”

But under these conditions on December 7, 1943, the black devils joined the British who had conquered Monte Camino in the meantime. The allies had conquered the left side of the winter line, but the bill was salty. Over a third of the brigade had been decimated among the dead and wounded and the survivors were accused of serious trauma. Monte Camino was defended by a battalion of the 15th Armored Grenadiers Division until 6 December. The British advanced to the south of Monte Camino and if the Allies had managed to push forward to the Garigliano could have cut off.

The Battle of San Pietro

The November defeat of Monte Camino and Monte La Difensa had left behind even in the relations between the American and British commanders. The new military plan of Clarck was based on the attack on Monte Sammucro, north of San Pietro.

The Raincot operation was prepared with the British X Corps that replicated the attack on Monte Camino, while the American II Corps of Keyes attacked the continuation of Monte La Difensa to prevent aid from reaching Monte Camino.

The day after, on December 8, the allied forces tried to take San Pietro, the artillery opened fire at 5.00 but the attack was rejected. The Germans still controlled Monte Lungo, which allowed the control of the Via Casilina

On December 15th there was the second attack on San Pietro, the 36th division resumed the attack but suffered great losses but the allies managed to conquer Monte Lungo. The taking of Monte Lungo forced the Germans to retreat 3 km from San Pietro.

When the American soldiers entered San Pietro they found only ruins, some civilians who had taken refuge in the caves greeted the allies. The balance of the battle was heavy: 140 civilians dead and 1200 soldiers of the Third Division between dead and wounded

The Germans also lost ground on the Apennine sector so the command gave the order to fall back on the Gustav Line.

On 6 January 1944 the Allies conquered San Vittore, the 12 Cervaro, the 15 Monte Trocchio, the last peak that blocked the entry into the Rapid Valley. The Germans withdrew to the Gustav Line.

From The Volturno to The Winter Line, Whashington, Center of Military History, 1990